Alamak ! So If Pardon Tak Betul Does He Go Back To Sing Sing?

held that YDPA taken role of executive when granting pardon

therefore procedures and laws of executive powers could be questioned

if Agong exercising executive power, how can he not be justiciable?

It is not royal pardon, it is executive pardon

because he took role of executive (in granting pardon) he said

it is proper to initiate proceedings, evidence, oral testimony, might be called

member of public has right to file action

Anwar filed striking out on no locus standi, frivolous, embarrassment, abuse of court

May 9, 2018 several illegal, unconstitutional moves to ensure pardon and release

pardons granted should be on advice of Pardons Board, which was not formed

So what happens if the pardon tak betul? Does he go back into the slammer?

But for certain if the Royal Pardon tak betul his conviction will still stand and he will not be able to run for election for FIVE YEARS AFTER being released from jail.

So in case he has to go back into the slammer and finish the remainder of his jail term, then he cannot stand for elections for FIVE YEARS AFTER eventually completing his jail term.

When can that be?

The trial date has been fixed for March 24th 2021. Say it takes a year to complete the trial (2022). Say the conviction and the jail term are reinstated. If there is a year left of the original jail term  then it will be 2023 before he is out again. Add 5 years to that and he can run for election again circa 2028. The Brader will be 81 years old.

I hope by that time the water in Kelantan can be cleaned up, there will be no need for Kongress Maruah, Kota Gelanggi would have been opened up for archaeological digs and tourist visits.

Or maybe by that time the Sodomy laws would have been abolished? The natives can just run around yappa-dappa-dooing, bootie bustin' and whatever to their hearts' content.

I am grateful to the Judge Dato Akhtar Tahir for his judgement which basically challenges even the Yang Di Pertuan Agong's role as the Agong.

For indeed granting 'pardons' is a prerogative of the YDP Agong, the Rulers and the FOUR Governors / Tuan Yang Di Pertua only. However it has been decided by the Court that a pardon by the YDPA is not above the scrutiny of the Court.

If the Court finds that the Pardons was not done properly then who is liable ? Certainly Brader Anwar had no say in the pardons. One point of contention in the suit is the Pardons Board was not  "properly" in place at that time. If true then the Pardons Board is out of the picture. Yet the King signed it.

In the old Malay movies it was much simpler. The Sultan would just decree something and that was it.  No need for lawyers, Courts, judges, pardons boards etc. 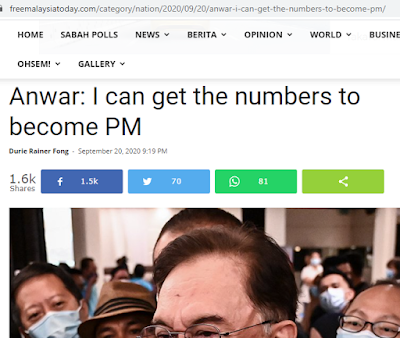 KK: Anwar confident of support from MPs to be next PM if PH wins GE15

Anwar said that was only Lim’s personal opinion

We support Anwar, but if he can’t, we should give Shafie a chance Lim said

In July, Lim and Mat Sabu came up with Anwar-or-Shafie plan

Some PKR leaders disagree, saying PH should stick to Anwar

criticised Lim for continued support of Shafie as PM

Lim’s support for Shafie was act of betrayal of PH

if no longer spirit of solidarity, just dissolve PH

Then the gatekeepers begin wearing special clothes, perform unusual physical movements with their hands and feet, chant strange mantras and hymns and say that they can communicate with invisible-man in the sky. If the villagers want to avoid punishment they better follow the advice of the gatekeepers.

So here no one knows exactly when the next General Elections will be held. Whether it will be 2023 or late 2022 or next month. It is another invisible-man-in-the-sky situation.

Yet Brader Anwar is already arguing about becoming the next PM!!

For the past 22 years he could not become the PM. Or the DPM. Or even a Cabinet Minister.

Dr Mahathir did not keep to the agreement - he was supposed to be Prime Minister for 24 MONTHS. But Dr M quit in 22 months !!

Still Brader Anwar could not get enough MPs to support him to become PM.

Now he is arguing about becoming the PM AFTER the next 15th General Elections.

And the PKR fellows are already accusing the DAP of "betrayal" over the next General Elections which have NOT happened yet ??

The problem for PKR is that they have only been allotted SEVEN seats in the Sabah State polls. That is charity from Shafie Apdal.

In one stroke Shafie Apdal has shown that PKR really has no clout - either in Parliament or on the ground in Sabah.

Let me make a statement - whoever wants to be the next PM must kow tim and kow tow to both Sarawak and Sabah.

Whoever controls Sabah and Sarawak can make anyone kow tim and kow tow to them (plural).

Hamzah is handling things wrongly - "tension, clashing between GRS, to remove any materials, slugging it out"

Here is some not very good news coming out of Sabah.

This is taken from The Star as reported in Malaysia Chronicle here : 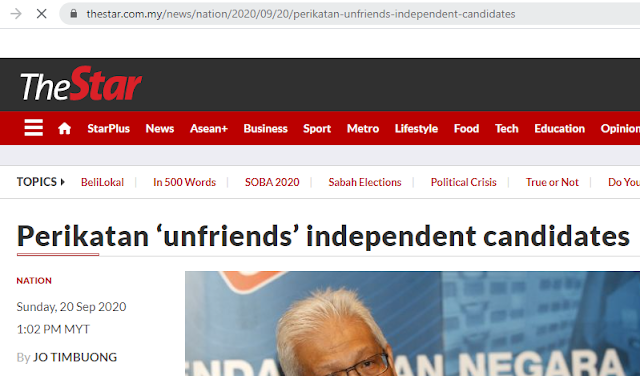 Perikatan Nasional distanced itself from independents claiming to be friendly

The only party Perikatan-friendly is Parti Bersatu Sabah

never given right to any independent to consider themselves PN friendly

Hamzah has also instructed Perikatan campaign workers to remove any materials that would suggest any of the independent candidates were affiliated with the coalition.

calling on parties to common goal

He said clash started when Umno contested Paginatan, which was given to STAR

This is a very dangerous thing to say :

So does this mean your campaign boys will go around taking the law into their own hands and tearing up other peoples' posters, banners and stuff?  This is inviting trouble.

The right thing to do is report wrongdoings to the Elections Commission. It should be their responsibility to sort these things out.

It would appear that some folks are getting desperate in Sabah. If the BN, PN and PBS are fielding their own candidates in 16 constituencies then how can they still be a Gabungan?

Then the Police have also stated that they have received intelligence that foreigners from a foreign country are planning to enter Sabah and disrupt the elections. 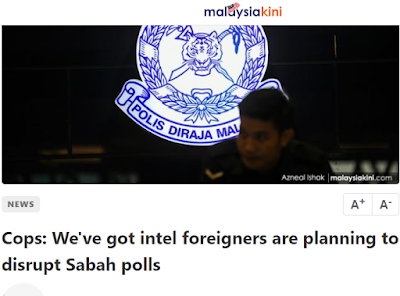 No such thing has ever happened before, not since Sabah joined Malaysia in 1963.

Why would the foreigners be interested in disrupting the Sabah elections?

What would they get in return as "foreigners"?

How will disrupting the Sabah elections benefit "foreigners"?

Another possible theory is if there are some desperados inside Sabah who have decided to hire "foreign thugs" to create trouble.   Then it can become a case of 'locals hiring foreigners'.

I am just guessing but if this is the case then the Police should look for intel on who is paying these foreigners? No money no hooligans mah. Someone must be paying them. Who? In what currency? Ringgit? Swiss francs?

The real issue here is Shafie Apdal and party Warisan are now leading the pack by a hundred kilometers.  There are ONLY FIVE days to go for voting and there is no way the other contenders (especially from Semenanjung) are going to catch up with Shafie Apdal.

So kepada semua rakyat Sabah - FOR THE NEXT FIVE DAYS BE ON THE LOOKOUT.

Most importantly jaga reaksi anda sendiri. Dont let yourself be provoked by anyone. Just stay calm, be patient and ignore any provocations. 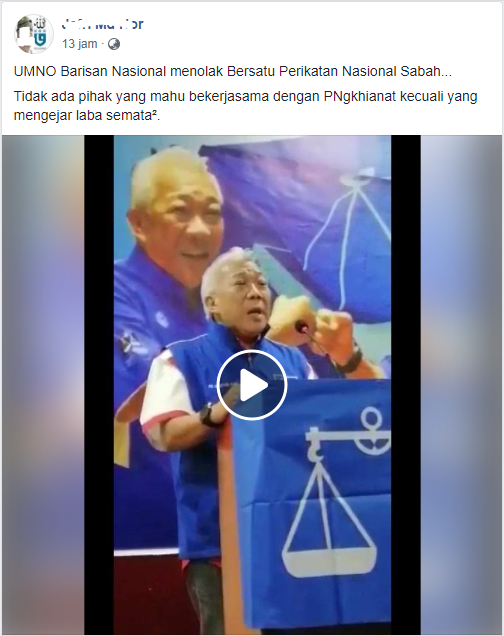 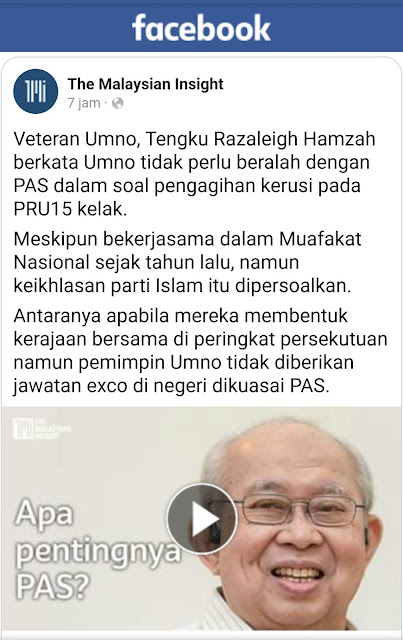 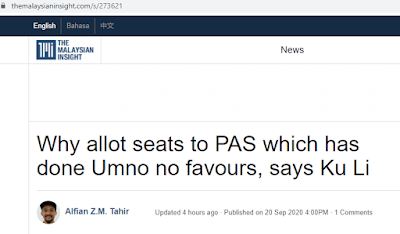 UMNO does not need to give up seats to PAS in next general election as the Islamist party has refused to do any favour for its Muafakat Nasional (MN) partner, said Tengku Razaleigh Hamzah.

He said a case in point was PAS’ failure to appoint Umno assemblymen to the state exco in Kelantan, Terengganu and Kedah – the three states it governs with Umno as an ally. 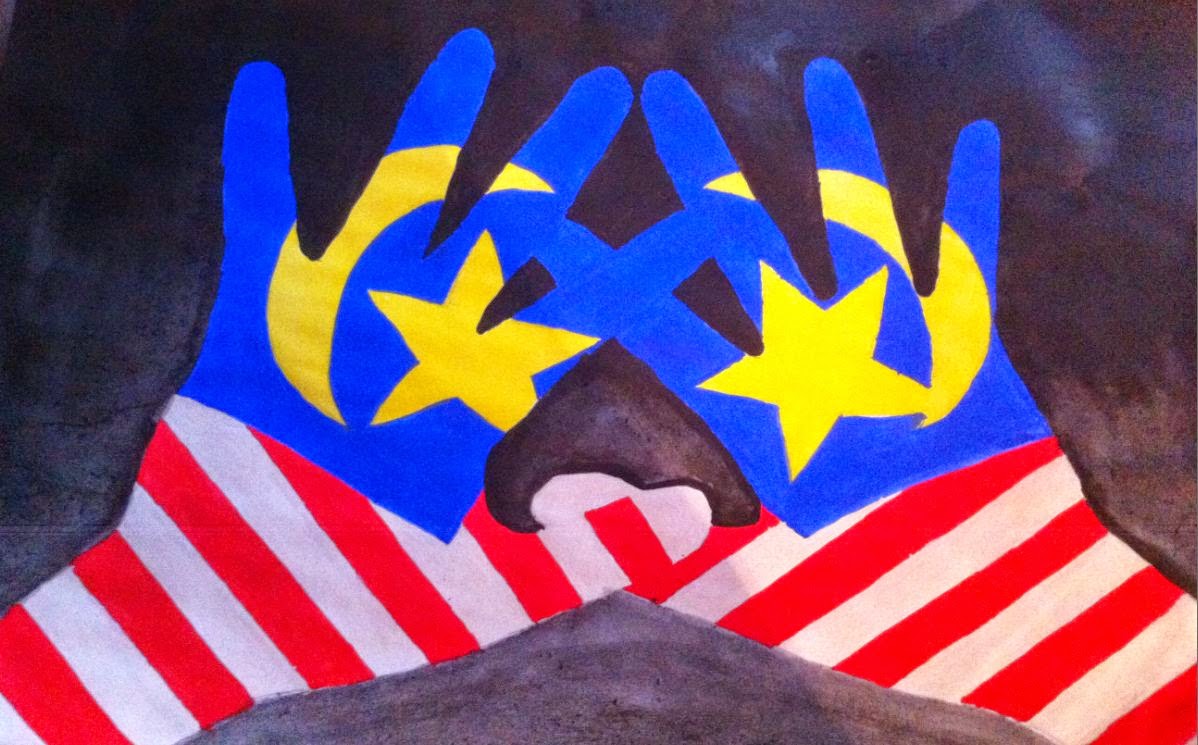 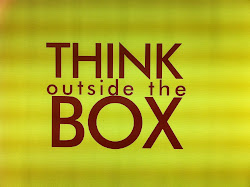 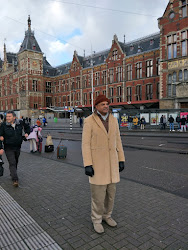